-We have revisited the grape R2R3 MYB gene family (Wong et al., 2016) and adopted their names according to the Super Nomenclature Committee. 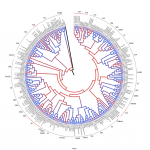 ah). Annotations without RNA-Seq confirmation were taken from the Pinot Noir reference genome (PN). AtmaMYB was used as outgroup (AT5G45420). Red lines represent subgroups that were further defined based on the presence of C-terminal motifs identified in MEME and/or described by Stracke et al. (2001). Bootstrap values (>75) are shown on a coloured scale ranging from purple to blue. Click on thumbnail to access the high-resolution image. You can also access the PDF version (no subgroup numbering) for manually inspecting IDs, click here.

Grapevine accessions show the cultivars in which these sequences were taken (PN: Pinot Noir, CV: Corvina, ML: Merlot) and the A. thaliana were taken from The Arabidopsis Information Resource (TAIR) database. The alignment of the sequences was performed with MUSCLE (parameters by default). By using MEGA X, the best protein model (ML), searched based on the lowest Bayesian information criterion (BIC) score, corresponded to the Jones-Taylor-Thornton (JTT) substitution model and rates among sites following a gamma distribution (G).  This analysis was carried on MrBayes software and 10 millions generations were performed with a final standard desviation(sd)=0.092521 Numbers in branches display the probability of a correct tree according to our data.Branches are couloured according to their probability. Click on thumbnail to access the high-resolution image. You can also access the PDF version for manually inspecting IDs, click here.